The following letter, written in 1859 by an unidentified Welshman in Emporia, Lyon County, to his brother and sister in Carmarthenshire, Wales. The letter is taken from the Kansas Historical Quarterly - The Welsh Settlers of Emporia: A Cultural History, by Carolyn B. Berneking. The original source is Alan Conway, ed., The Welsh in America (Minneapolis, University of Minnesota Press, 1961), pp.131-133.

[My note. Kansas was first opened to settlement by whites of European origin with the passage of the Kansas-Nebraska Act of 1854. Prior to that time, the area was reserved for Native Americans who had lived on the land since time immemorial or for Indian tribes who were relocated from the east to Kansas territory.

The letter does not discuss "Bleeding Kansas", with its history of border disputes that involved John Brown and Free-Staters versus the Missouri Border Ruffians, who favored slavery in the territory. Nor does it mention the many land disputes - the lack of clear title, which resulted from Indian claims and claim jumping. The letter precedes by a year, the terrible drought of 1860.

Like any one thing, the letter is a snapshot in a moving picture of Kansas history.]

Kansas is a splendid place for a man who has got £200 [two hundred pounds], to come out and buy a farm. He can get land at $1.50 per acre and as good as there is in the Vale of Towey, after being cultivated. It doesn't require any manure at all. I have seen land from which the twentieth crop in succession is taken out of it this year and it seems as good as ever. Some men I know here keep three or four hundred head of cattle, and they have not a yard of land of their own, and don't pay a cent for grass. . . . The grass in many parts is as high as my head. All the cattle are fat and they are kept out the whole winter. . . .


[My note. The vale of Towey (spelled Towy) is in Carmarthenshire, Wales, through which flows the River Towy. It is adjacent to the westernmost point of the Brecon Beacons National Park. The tall grass referred to is probably the famous Kansas Bluestem, which reaches a height of seven feet.]


There is an Odd Fellow's lodge at Emporia. I am not disappointed with America at all. It is far better than I expected. You can guess what sort of a place Emporia is. She is a new town, only two years of age, with about four thousand inhabitants. There is only one policeman in the place. I believe that America is a home for a workingman. The people here are not rich -- they are all new beginners, but none are poor, and beggars are not known. I have not seen a drunken man since I landed in the United States.


I have been working all the fall until now with Evan L. Jones, son of Llwynfedwen, Llanfynydd, but today I am going to team lumber from Emporia to Arkansas City, down south about two hundred miles. All teamsters here camp out at night. 'Tis not unusual to see two or three hundred wagons starting out together from Emporia to all parts of the South, and they are called a train. The reason why they go together is that the Indians are dangerous. The southern part of Kansas is not inhabited at all, the country is quite open from Emporia down to the Gulf of Mexico -- about 1,000 miles of land. . . .

[My Note. Evan L. Jones came to Emporia in the spring of 1858, settling on 160 acres at Dry Creek. William G. Cutler's History of the State of Kansas, Lyon County. The location of Dry Creek is south of Emporia near the airport.]


I am sparking a nice young woman here and I intend to get married before long. She is a Welsh girl and a newcomer.

[My note. Sparking was a 19th Century term for courting or wooing a girl.]
Posted by you are what you read at 7:56 AM No comments:

In Kansas, I-35 runs 234 miles from Oklahoma through Wichita, past Emporia and Overland Park then on to Missouri.

North of Emporia, I-35 passes Lebo, the principal town of Coffey County.


Lebo's history dates to April 17, 1883, when David L. Jones purchased 80 acres. The land was just east of land owned by the Santa Fe Railroad where a train depot was going to be built. This was good news for Mr. Jones and bad news for the small community of Arvonia, Kansas to the north, which was also hoping for the railroad.


On February 11, 1884, the first train arrived, and the town of Lebo was off and running, its economy based on the farming, livestock, coal mining, and the railroad. Lebo has never been a large town and today its citizens number less than 1000 souls. Nevertheless, it is a happy place where everyone knows your name, and the big event in the fall is the sporting event under the Friday night lights at the high school football field. Lebo is also proud of its winning basketball program.


What is left of Lebo are a beautiful two story limestone, a drug store, Sleezer's barbershop, a lumber store, the grain elevators, and enough businesses to keep the community going for another 100 years. It may not be Manhattan, but it might be Kansas' own version of Mayberry. 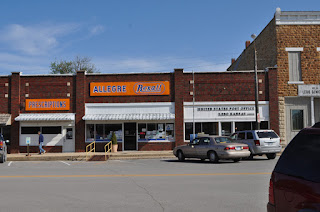 Walter and Evan (Evie) Jones, descendants of the founders of Lebo, were reared on a farm north of Lebo, Kansas, in Coffey County. At the turn of the century, the brothers inherited 200 acres of land, and they began farming forming a partnership, Jones and Jones. Walter Jones died in early 1953, and Evan followed a few months later. Along with Walter's wife Olive, the Jones Estate was left in a trust that serves the interests of needy children and funds the Jones Policy Center, the W.S. and E.C. Jones Conference Center, and the Jones Distinguished Professorship at Emporia State University. Jones Institute at Emporia State University. 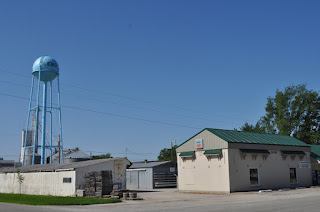 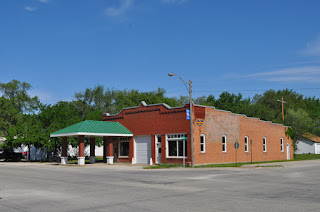