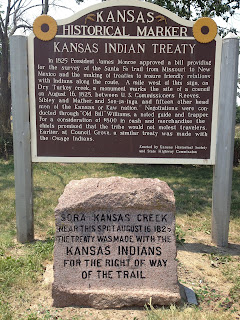 You have to get off modern I-135 between Wichita and Salina and take Old Highway 81, a two lane rock and concrete composite roadway just to the west of the interstate. Don't be confused. There is the newer US Highway 81 that is just a bit to the east.

Today, the trip is comfortable in an air conditioned car. But, in 1825, it was marked by the annoyance of traveling through prairie grass as tall as a horse, the danger of prairie fires, Indians, and the hazards of weather, animals, and insects. George C. Sibley, who would survey the Santa Fe Trail, described in his journal that the travel was accompanied,

"... with difficulty and embarrassment, arising chiefly from the annoyance of the green flies of the Prairies, which obliged the Party to travel much in the Night, frequently leaving the direct route in order to find Shelter from the flies during the day, in the Small groves that are Seen here and there Scattered like little green Islands."

Not mentioned, but still very real, were the chiggers, mosquitoes, and tics, along with the stinging nettle and abundance of poison ivy. In addition to surveying the Santa Fe Route, Sibley and others met with the various Indian tribes along the route to insure safe passage for travelers.

On Old Highway 81 about a quarter mile south of Elyria, Kansas is a marker erected by the Quivera Chapter of the Santa Fe Trail. The marker honors the 1825 Kaw Indian Peace Treaty allowing peaceful travel for traders along the Santa Fe Trail. The actual location of the treaty itself is a mile and a half west on Comanche Road at Dry Turkey Creek. A marker is mistakenly placed north of Comanche Road. The actual treaty site is south of the road and on the west side of the creek.

The location was chosen because then it was the only stand of trees for miles around. The treaty was signed under an old oak tree, a rare site for the few trees that survived the prairie fires and droughts were the cottonwoods.

Mexican independence from Spain opened up trade between Santa Fe and Missouri, and William Becknell is credited with the first trip. On September 1, 1821, Becknell with a small group departed Arrow Rock, Missouri, on horse back.  They arrived in Santa Fe in November to the news of Mexican Independence from Spain. Becknell and his small band disposed of their trade goods for bags of Spanish silver dollars. In early December, they began their return trip to Arrow Rock and arrived home on January 22nd.

The financial success of this trip convinced Becknell to return to Santa Fe. The locals called Becknell's venture foolhardy because of the danger of Indians and nicknamed it the "Caravan of Death". On May 22nd, Becknell and 20 men loaded three wagons pulled by 24 oxen with merchandise. If you are a history buff like me, then you will want to read more about the trip, and learn about the hardships of weather and the dangers of the Indians on the way.

See the complete route of the Santa Fe Trail.

On August 15th and 16th of 1825, representatives of the United States and the Kaw Nation met in a small grove of trees a bit to the south of the Santa Fe Trail, near present day Elyria to sign a treaty of peace. The Kaw Indians traveled 45 miles to the site of the treaty from their village at what is now Manhattan, Kansas. The treaty between the Kaw Indians and the United States provided for the safe passage of traders along the Santa Fe Trail.

The marker notes that another treaty with the Osage Indians was made earlier at Council Groves. Other treaties were signed with the Sioux, Cheyenne, Crow, Otoe and Missouri, Pawnee, and Maha. Becknell's Santa Fe route also crossed Comanche territory. While there was no official treaty, Americans often traded with the Comanche.


The Kaw Indians (also known as Kanza, Kansa, Konze, or Kansas) are member of the Dhegiha branch of Mississippi Valley Sioux. The name is translate as "People of the South Wind", something understandable to anyone who in spring and summer felt the hot, dry air blow steadily from the south across the Kansas landscape. For much of Kansas history, the tribe lived along the Kansas River at a location near present day Manhattan. Today, the Kaw Nation's headquarters is in Kaw City, Oklahoma.

Charles Curtis, Oklahoma Congressman and Vice-President under President Herbert Hoover was a descendent of the Kaw Indians. His great, great grandfather was Chief Monchousia, (ca. 1765—1838), whose image hangs in the White House. The name of Topeka, Kansas, is the Kaw word Tó Ppí Kˀé meaning "a good place to grow potatoes."