Go to Kansas Memories to read online a Useful Handbook for Immigrants and Settlers who wish to settle on lands belonging to the Atchinson, Topeka, and Santa Fe Railroad.

Cyrus K. Holliday was the organizer of the ATSF. He began the project of building a railroad through Kansas as early as 1859; but because of the Civil War, Indian land titles, and the difficulty of financing the project, construction didn't begin until October or November of 1868. 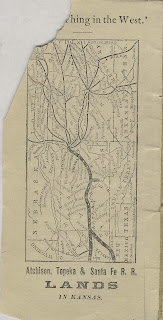 There were other railroads selling land in Kansas.

See, for example, Emigrants' guide to the Kansas Pacific Railway lands : best and cheapest farming and grazing lands in America.

The ATSF helped to support its railroad building in Kansas through the sale of land to immigrants.

One of the first groups to take advantage of the land opportunities offered by the ATSF were the German Mennonites from Russia. The first group of around 800 arrived in 1874. A few families settled in Hillsboro, Marion, while another group traveled directly to Peabody. The main party, led by Jacob Wiebe, went on to found the town of Gnadenau.

The contract to purchase lands in Kansas by the Mennonites provided the following: rights of first selection and first purchase of 18,000 acres with a 56 per cent discount off the set price; buyers had five years to pay for their bargain lands. Later, another 25,000 acres brought the total to 43,000 acres available to the Mennonites through this contract.

The Mennonites Arrive in Kansas.

Read also, From Russia with Wheat: The Kansas Mennonites by Kenneth Peters.

Posted by you are what you read at 9:15 AM No comments: