In 1869, a middle-aged Frenchman from Bordeaux by the name of Ernest Valeton de Boissière (1811-1894) purchased 3500 acres of prairie in Franklin County, Kansas - his dream to create a silk producing community. De Boissière imported silk worms, planted Mulberry trees and built a three story home with 60 rooms for 40 French families. These were les miserables Victor Hugo wrote about, workers oppressed by low wages and high prices in France.

De Boissière's silk would gain national attention and win prizes at several expositions, but the community disappeared, the victim of cheap silk from China.

The house burned down and today, all that remains is a one room schoolhouse off of old highway 50. If you look closely at the image above, you can see a white haired de Boissière standing in the doorway of the schoolhouse.

By 1892 the dream was gone and de Boissière gave donated the home and land to an orphanage. He returned to France where he died in 1894.


Original image of old Silkville school from Kansas Memories. Read more about Ernest de Boissiere.
Posted by you are what you read at 7:27 AM No comments:

The Welsh Settlers of Osage and Coffey County

Carolyn B. Berneking has written an excellent article on The Welsh Settlers of Emporia:A Cultural History. The article, which is about Emporia and Lyon county, could equally apply to Osage and Coffey Counties to the east of Emporia, and the towns of Arvonia and Lebo.


As Carolyn notes in her article, "the Welsh towns of Llanfynydd, Corwen, Cyfarthfa, Dowlais, Merthyr Tydfil, Anglesey, and Aberystwyth figuratively became Carbondale, Reading, Burlingame, Arvonia, Lebo, and Emporia in Kansas as natives of Wales settled in this country." From 1850 to 1870, estimates are that about 60,000 people emigrated from Wales to America. While most settled in communities in Pennsylvania, New York, and Ohio, a significant number began new lives in Kansas. The National Library of Wales.


From R. D. Thomas' Hanes Cymry America -- The Kansas Chapter, published in 1872 in Welsh and translated by Phillips G. Davies. Republished by the Kansas Historical Society, 1977.

Several religious and adventuresome Welsh settled in this town [Emporia] 8 to 10 years ago. The town had been started before the recent civil war, but its growth was retarded during the disturbances. But after that the city began to grow and succeed until it now is a populous, industrious, and successful city. It is the county seat of Lyon county, and is located in a pleasant place between the Neosho and Cottonwood rivers. It has wide streets, several large stores, many good houses, some excellent churches, and growing businesses; two railroads run through it already, from Junction City and from Topeka, and one to Burlingame, Reading, and near Arvonia. Emporia contains several Welsh who are craftsmen and rich business men, and some of them are in high positions, such as Dr. Morris, Jones, Thomas, etc. There also is the office of Wm. B. Jones, Esq.. This growing city will quickly be second in size to the city of Lawrence. Many Welsh farmers live near it.

The Welsh settlers who came to Kansas in the late 1800's became farmers, doctors, businessmen, and even coal miners for Kansas had coal deposits in and around Emporia, Kansas. In 1889, Osage County had 118 coal mines, employing over 2,200 people and producing 400,000 tons of coal. In 1969, coal mining ended, but the pits filled with water still linger. GeoKansas.

Posted by you are what you read at 9:40 AM No comments:

Off Interstate 35 on the way north and east from Emporia to Overland Park is all that remains of Arvonia, Kansas. The marker is at the turn off to Lebo, Kansas. Turn onto Hoch Road opposite to Lebo, go north 3 miles, turn left on 325th Street (it is just before the bridge that crosses Melvern Lake), and drive up a gravel road a quarter of a mile. You find yourself on the south end of a little known rural community called Arvonia.

In 1869, J. Mather Jones of Utica, New York and James A. Whitaker of Chicago, bought the land and founded the town of Arvonia, Kansas. In 1871, nearly 450 residents lived and worked in Arvonia. Today, there are perhaps less than 10. All that remains is a beautiful one room schoolhouse, a church, a few beautifully kept homes, and the town well where the residents used to gather water.


Shortly after its founding, Arvonia businesses included two cheese factories, a sawmill, coal mines, a general store, a chicken hatchery and a hotel. Arvonia was on its way to becoming a bustling community in one of the newest states in the United States. But town survival was a question of access to railroads, and unfortunately for Arvonia the railroads went north to Reading and south to Lebo. 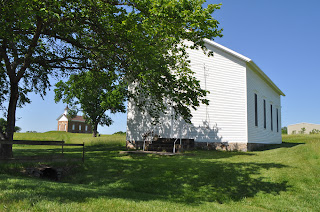 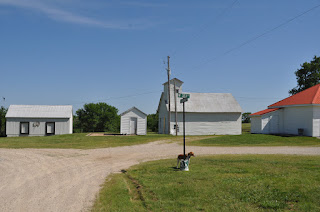 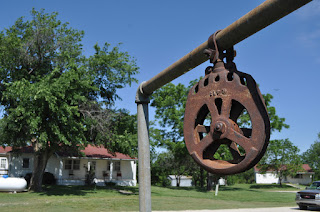 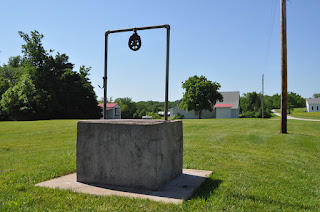 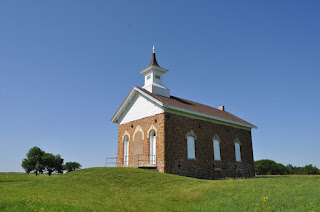 Read more from the Lebo Light.
Posted by you are what you read at 9:01 AM No comments: