“I find it wholesome to be alone the greater part of the time. To be in company, even with the best, is soon wearisome and dissipating. I love to be alone. I never found the companion that was so companionable as solitude.” - Henry David Thoreau 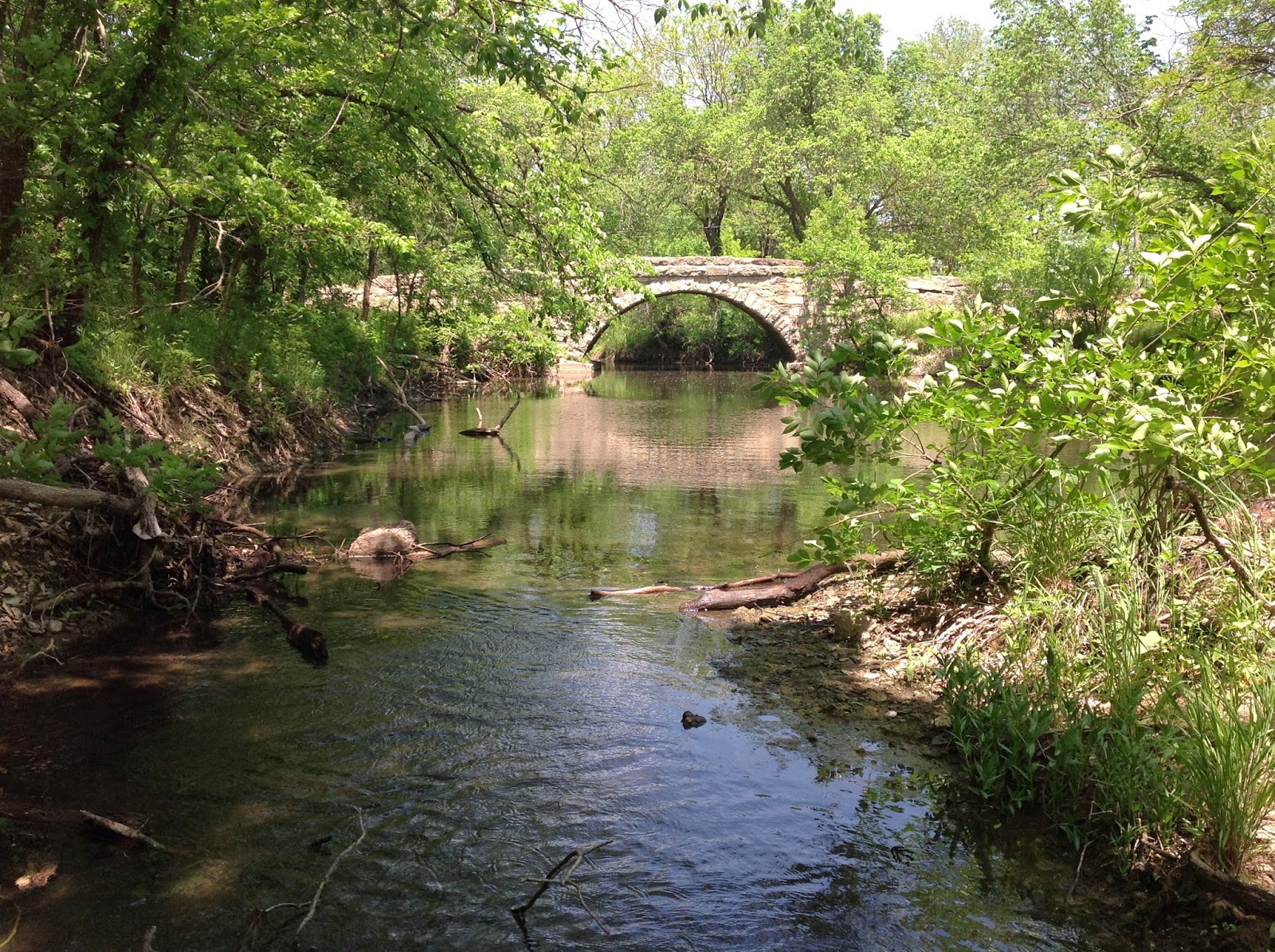 People come to Polecat Bridge for many reasons. I come with my dog to walk the banks of Polecat creek, and occasionally to sit and read.

Catalpa trees with its elephantine leaves grow along the bank. In the early spring it produces beautiful white flowers that later become long seed pods. Walnut and Elm trees also loom overhead. Minnows swim in the creek and across the water skitter water striders, zig-zagging back and forth as the dog plays prances joyfully. It is quiet except for the occasional truck or car that comes roaring down the dirt road, slowing down to cross the bridge and kicking up a cloud of dust. This is a small price to pay to sit and read a book at Polecat Creek Bridge, a single span stone arch bridge, located five miles south of Rose Hill, Kansas then one and a half miles east on 230th street. C.C. Jamison

The bridge was built by C.C. Jamison, who at the age of 15 arrived in Kansas with his parents in 1875,  first settling Hutchinson, then in Pratt County, and finally in Augusta. Jamison became a contractor building several of the stone arch bridges of Butler County, Kansas. He built his first stone at the age of twenty-four, a 40 foot stone arch bridge, across Dry Creek, between Bruno and Augusta. History of Butler County, Kansas by Vol. P. Mooney.

A few hundred feet to the east, lies the ghost town of Providence, Kansas, a spa once famous for its mineral water. In 1873, a farmer dug a well and found the water strange to the taste and mineral water was discovered.


A.A. Hyde the inventor of Mentholatum promoted the mineral water and built a hotel with ten rooms, a bath house and dining room. A general store was added across the street. Perhaps for this reason, the stone bridge was built.

The town and  hotel are documented in both the 1887 and 1905 Kansas Atlases of Butler County and Richland Township.

I used to think of the Chishom trail as a well-worn path followed by herd after herd. Instead, the trail was like a reed blowing in the wind, following the grass where it was green and avoiding farmsteads that popped up throughout southern Kansas. Once upon a time the trail ran through Richland Township between Eight Mile and Polecat Creeks.

Old time settlers told tales that included Indians, prairie fires, and grasshopper. Read their stories in Mooney's book.
Posted by you are what you read at 11:18 AM No comments:

Sometimes a pretty bush is so widespread, it gets overlooked.

Anyone who is touring Kansas in winter spots these bright red berries on deciduous bushes. The Latin name is Symphoricarpos orbiculatus.The common name is Coralberry, one word. The shrub is found from New York to Alabama, and north to Minnesota.

I spotted this plant at Lake El Dorado in December of 2013. I was walking along a woodland path.

This plant grows as a  small, mound-shaped, deciduous shrub with shredding bark on older wood with brown to purplish branchlets, usually growing to 4 ft. but can reach 6 ft.
Posted by you are what you read at 3:55 PM No comments:

This is a return visit in December 2013 to the stone bridges of Butler County, Kansas.

This group of four bridges is located east of Wichita, just past Augusta and south of El Dorado, on the north side of Highway 54/ Highway 400. If you get out and wander around, it takes about 1-2 hours.You can also get here by traveling south of El Dorado on Haverhill Road.

None are on the List of bridges on the National Register of Historic Places in Kansas. This is a shame.

Posted by you are what you read at 3:36 PM No comments: